After 2 days grounded by bad weather the team finally got into the air on Wednesday to head for our Northerly site (85.58°N) less than 500 km from the North Pole. The GPS display on the cockpit shows our destination as ‘HAAS3’ in the opinion of Christian a good place to land the plane but not somewhere that anyone has yet trodden. 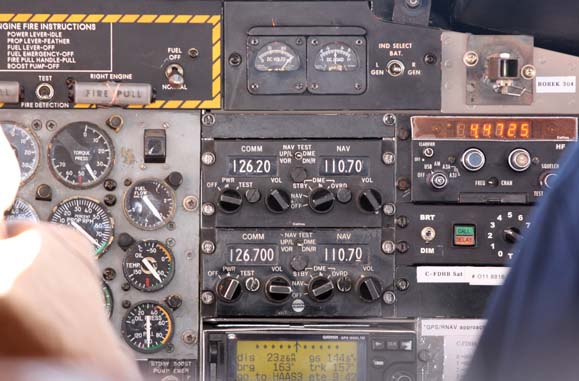 After what can only be described as a very exciting landing involving several bounces the plane landed, unloaded and then went off to cool down it’s skis. The skis get so hot during landing that if the plane just stops it will freeze solid to the ice making it impossible to move the place again, not a good idea when you are 400 km from home! 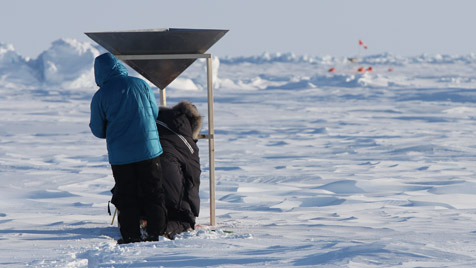 Once completed the two sites are fully equipped with corner reflectors and markers ready for the over-flights by the various aircraft (the near ‘blue’ site can be seen in the foreground and the far orange site in the background). 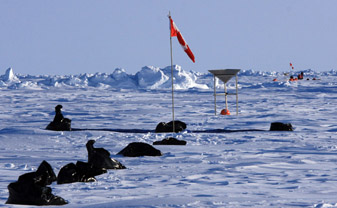 Over the next two days the aircraft overflew and we then returned to carry out our more detailed survey, in some ways this is when the real work begins. Only when we are in transit from one site to the next do the occasional opportunities arise to grab some more scenic pictures of the ice.

The blue ice pushed up in ridges demonstrates the incredible forces at work when the ice is compressed by winds driving two sections of the pack ice together.

Our pilots are wonderfully patient and give us the maximum time available on the ice but we always need to remember the time it takes not just to unpack but also to pack up the plane before departure.

On our return everyone works flat out to measure how deep the snow is around the target and to look in detail using a ground based radar operating at the same frequency as the satellite. 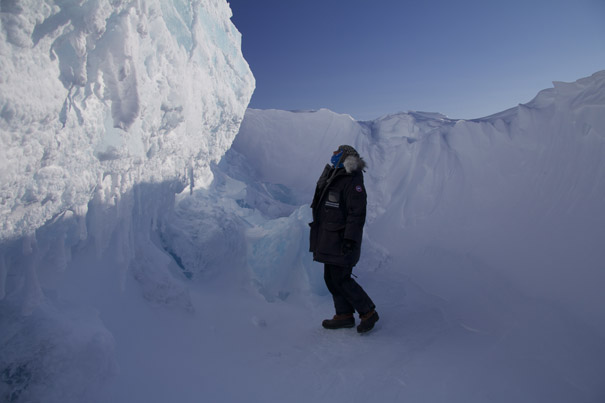 Not far from one of our sites the wind has carved out a huge hole next to the ridge. Here the snow thickness is more than 2 metres. 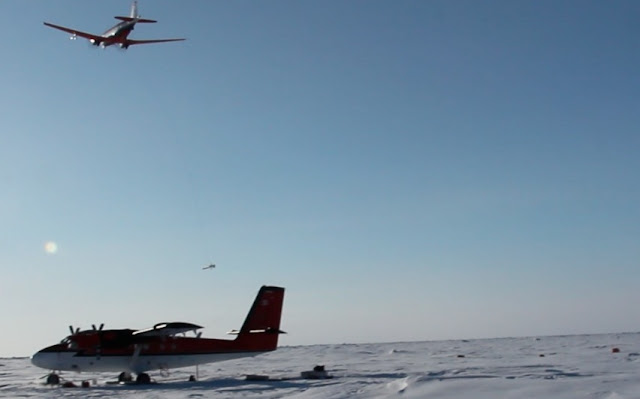 Time is so precious that there isn’t much that distracts us from our work. However the unexpected arrival of one of the survey aircraft caused everyone to drop their tools and pick up their cameras. The Polar-5 is a converted DC3 with many instruments onboard. The most impressive from the ground is the EM-bird designed to measure ice thickness but only at a low level, 30ft (10m) in fact. This photo was taken on the 2nd pass. On the first I was in line with the bird – pretty scary seeing what looks like torpedo heading towards one at 250 knots only feet over your head.

Finally after 8 hours working in temperatures of -30°C, with multiple surveys including nearly one thousand snow depth measurements, the exhausted team gets back into the plane with conversation stifled as everyone need just warmth and food.
Posted by Seymour at 21:25 No comments:

Not your typical Saturday afternoon

After yesterday’s rather gentle foray onto the ice in nice weather to lay out our two practice ground targets (http://bit.ly/hPcS4n) we returned to find out exactly where we had been thanks to our GPS readings. Google map confirmed that we had indeed been ‘walking on water’ when walking between the two sites. Of course the scene now is rather different, apart from the icebergs which are still trapped solidly within the ice. 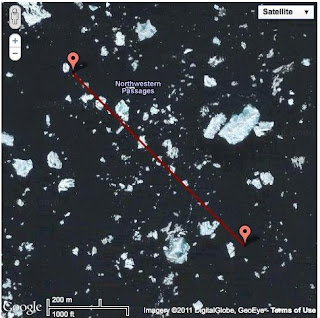 Before embarking on our second day trip out, and after some lengthy discussion, we decided that it would be useful to be able to see one site from the other, not so easy given the terrain and various bits of trapped bergs in the way. Justin had a 3m pole we could use but what to put at the top that could be seen from 1km away? Just after breakfast Justin emerged with what else but a Canadian flag for our target.

After a two minute pause for Justin to sing the Canadian national anthem (whilst we all stood at a safe distance) it was time to hop back on our snowmobiles to head to the other site to see if we could see the flag (the lack of wind being good for us but not so good for the flag!). 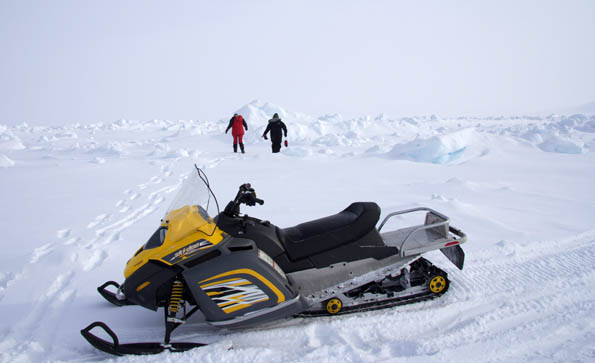 By the way did I say that in one day I have in one day become an expert (ha!) at skidoo driving (in the front my mean machine and behind the girls go for a quick recce). Seriously it’s very easy to pick up, the only danger being rolling the machine, which I have done once, and which being in snow usually results in laughter, rather than injury. 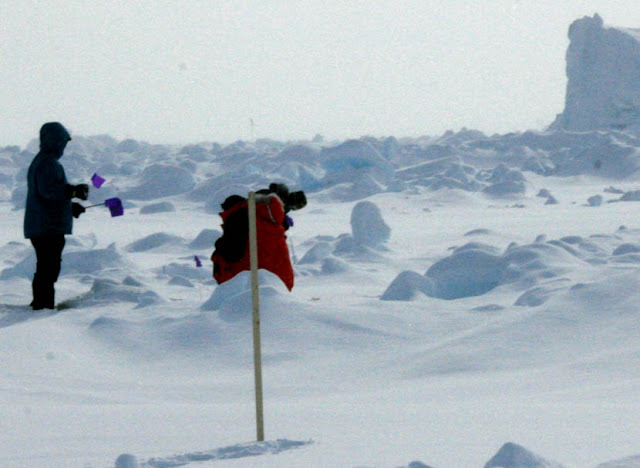 On reaching camp orange the big question was whether the flag at the other site would be visible. I was still digging some binoculars out of my bag when the other announced triumphantly that in fact it was visible with the naked eye. Next comes the business of how to line everything up. Sitting near our nice orange marker I first line up @polarosie (in the red) with the wooden stake at the centre of our site and the flag in the far distance (left a bit, right a bit – thanks to Bob Monkhouse and “The Golden Shot” for all that training during my formative years). Then it’s @polarosie’s turn to line up @katgiles (in black behind her and ably assisted by Justin on the left) whilst she puts flags in the direction of the other site. 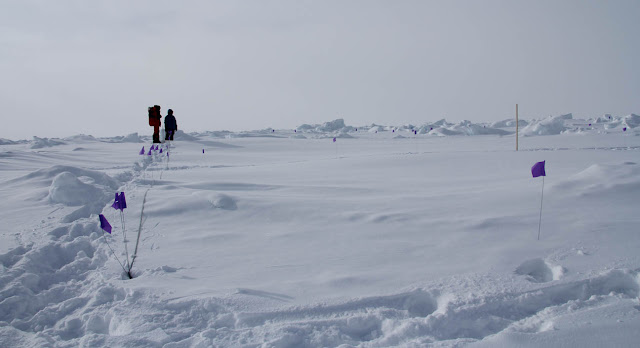 After another long discussion (the whole point of this preparatory exercise) the perpendicular to the line between the two sites is made, taking care not to trample on our precious survey area. After a short lunch break, during which the the juice froze solid in the straw I was using, the grid was complete and ready to conduct the snow survey.

So after a long tiring day we head back and one of our team spots something moving amongst the rough ice. Not yellow like a polar bear but more dark and shifting, perhaps an Arctic wolf out on the first sortie of the night looking for some prey. Hard to discern but in possession of a long lens (mine) they catch a few snaps as their skidoo races home. Anxious to see what sort of elusive creature they have photographed the pictures are downloaded as soon they return and when zoomed  revealed what is in fact quite a common sight in these parts........an oil barrel!
Now all that is left is packing up for (hopefully) the flight to Alert tomorrow.
Posted by Seymour at 19:06 No comments: 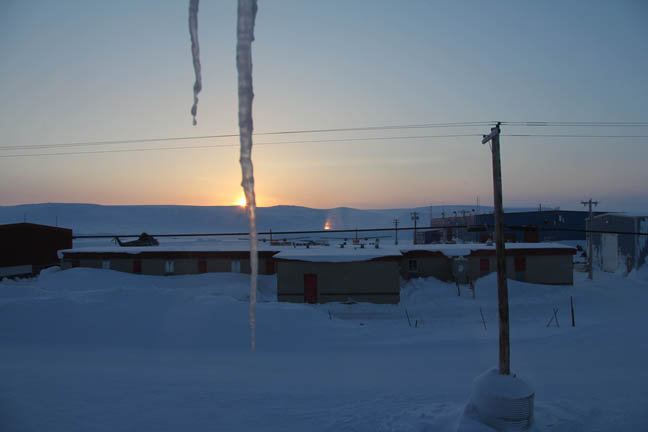 Just a short update to say that after a long journey north we ourselves and kit have arrived safely in Resolute. I have to say that the facilities in PCSP where we are staying are nothing short of superb. The temperature is down to below -30°C but being outside feel no worse that a cold day in the Alps. 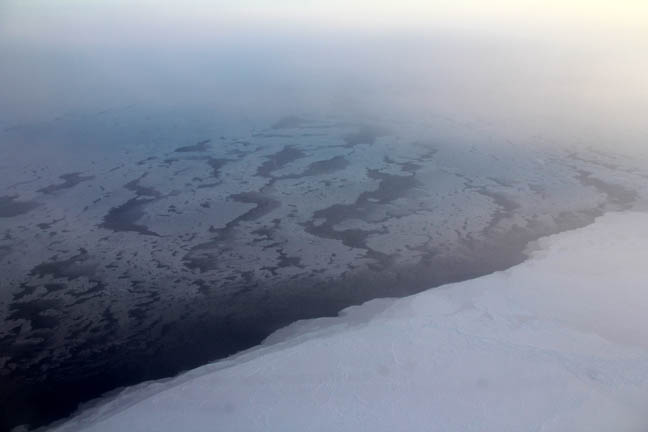 Flying in most of the scenery was basically white nothingness, interspersed with  occasional and amazing exposed rock. The final approach was probably best getting close up and real with the ice. The photo above shows the fast ice boundary and from then on the ice is solid until our base. 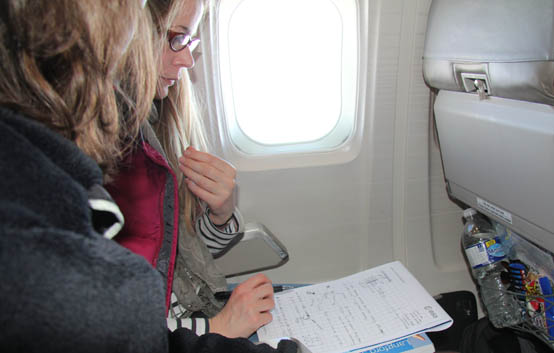 So now off to breakfast and then to finess our plans (drafted on the long flight up her) and gather equipment before hopefully heading out on the ice later today to see if our theory works in practice!
Posted by Seymour at 05:07 1 comment:

A short walk in Iqualit

So finally the day came for our route to head north. A three hour flight from Ottawa with a breakfast which we hoped would not reflect local cuisine: cold toast with lashings of some sort of jam mixed in with a small sausage, and bacon which I do not believe originated from a pig.
Leaving the plane by the back door we all expected to be greeted by a cold Arctic blast since we already knew the temperature was a balmy -24°C. Instead we were pleasantly surprised that, even without our proper Arctic clothing, it didn’t actually feel that bad. Heading into the very small terminal building (2 gates) we a realised there really wasn’t much there apart from a small shop and also that another group of Brits had headed straight out the other side to a known café (They later turned out to be the organisers of the race to the magnetic North Pole).
With nearly two hours to kill we found we had exhausted the interesting aspects of the airport in about 10 minutes, so all agreed that it would be a good idea to wander outside too.  Though we didn’t really need anything to eat (follow the hearty breakfast from earlier) we though we better not miss what might be the best café in the Arctic. 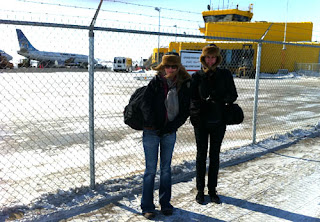 After a few hundred yards, hats and gloves were donned and coats tightened, but  still felt relatively warm so pressed on in search of the café, or any other features of interest.  Alas the café was never found. We did however find a Tanning Salon (perhaps the most northerly in the world?) but by this time the thought of disrobing was certainly at bottom of everyone’s list so all agreed we should turn around and head back. This time with our faces straight into the wind which none of us realised had been blowing from behind on our outward journey. I can’t claim it was like Scott of the Antarctic but we all learned a good lesson about wind-chill and the need to wear proper gear up here. Fortunately we were back in the terminal within about 5 minutes, due to quick walking, and after some rubbing of hands and feet the fear that we might have got frostbite on our first outing receded.
Posted by Seymour at 21:43 1 comment:

I think I'm packed but convinced I have forgotten something.
Posted by Seymour at 10:33 No comments: